It was Civil War history day for us. We decided to take a field trip to the Battle of Franklin historic site in Franklin, TN, about an hour away from where we’re currently camping.

However, as often happens, we were caught in the fog of war and became lost soon after parking in downtown Franklin. 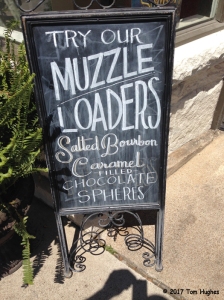 But at last we found a reliable source of information . . .

After getting a map and pointed in the right direction, we were off to the Carter House, the center of the battle . . .

We signed up for an hour walking tour and our tour guide was very good, a recent political science graduate who knew his history.

However, the highlight of the trip was talking to a young archaeologist who was involved in excavating part of the former Union entrenchments near the Carter House.

Apparently, soldiers were much smaller in Civil War times . . .