“He’s Just Looking for a Meal”

Here’s a short video of our friends Jim & Marianne feeding a ground beef ball to a roadrunner on their porch.

The sound in the background are boats on Lake Havasu.

Listen for when the roadrunner clicks it formidable beak.

Our Park Model View (Click on photo to enlarge it)

They’re all related and in that order.

First, we plan on staying the entire Summer in our Arizona Crazy Horse park model — mostly because we want to spend some money fixing up the park model. For example, we bought a storage bed. The mattress lifts up so that you can store stuff underneath (just like the bed in our RV). 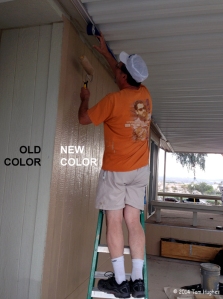 Painting the park model is part of this process. I spent a day washing our unit with TSP, another day taping off areas, and two days putting on a first coat of paint.

While I tried to do most of the work early in the day when temperatures are in the 70s – 80s, on Sunday I did a lot of painting in the heat. This is Arizona 90+ degree heat with about 8 percent humidity. Not the best time to do work of any kind.

I have a feeling that the heat had a lot to do with what happened next.

During dinner — which was a tender pot roast with hard carrots — some food got stuck in my throat and I had difficulty swallowing.

It wasn’t Heimlich maneuver time because I could breath ok, but I started throwing up on our garage floor.

Meanwhile, sensing the urgency of the situation, Jan brought back an entire group of people from a nearby house party.

What a scene. I’m sure I looked like death warmed over and several of the people gave me that “Oh my god!” look while others made suggestions ranging from jumping up and down to drinking Gatorade.

After a couple of minutes, I was able to get around and crack some jokes, but Jan suggested going to the local Emergency Room. I thought it was a good idea too. 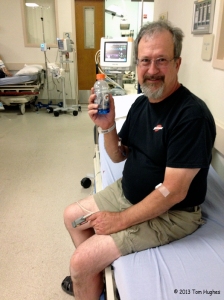 Where Can a Guy Get a Drink?

After a saline injection at the hospital, the food blockage in my esophagus cleared, and I could swallow again. Yahoo!

The Emergency Room was a trip. According to a medical tech who gave me the saline shot, it was an unusually busy Sunday night . . . heroin overdose, car crash victim, me, and a cast of others.

The ER doctor was great. If you have to end up in an Emergency Room, he’s the doc you want. He was multi-task man —  giving direction to the entire staff, finding time for every patient, and possessing a superb sense of humor. Kudos doc!

Jan was excellent during all this — she kept calm and got me to the doc on time.

So in under an hour, I was “cured”, told to eat small bites and chew thoroughly, and paid the $300 ER bill.

I took today off.

We Are Now Arizonians 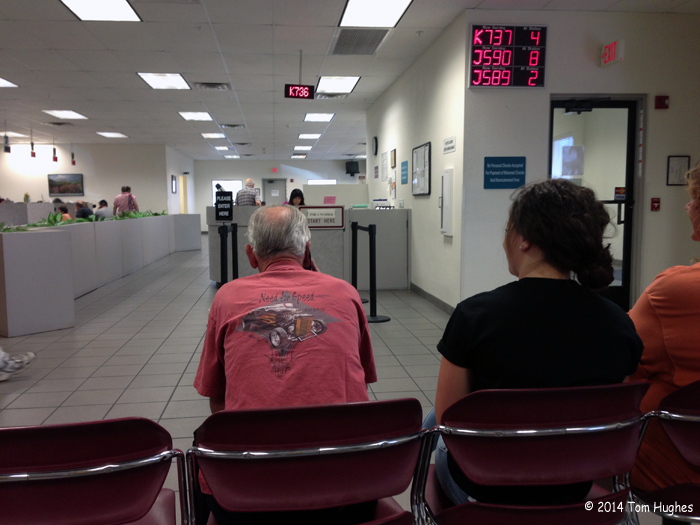 The AZ DMV — Our Path to Residency

Born of necessity (i.e., lower state taxes), we decided to abandon our proud Wisconsin cheesehead past and forge ahead into the less-taxed state of AZ.

The path to AZ residency led straight to the Lake Havasu City Department of Motor Vehicles (or AZ DMV for short).

It was there that we took eye tests, obtained AZ driver licenses, registered all our vehicles (+ the park model) in AZ, paid the AZ VLT (Vehicle License Tax) — ouch! — and registered to vote.

All of this in about 2 hours.

Needless to say, we were wiped out after we left. 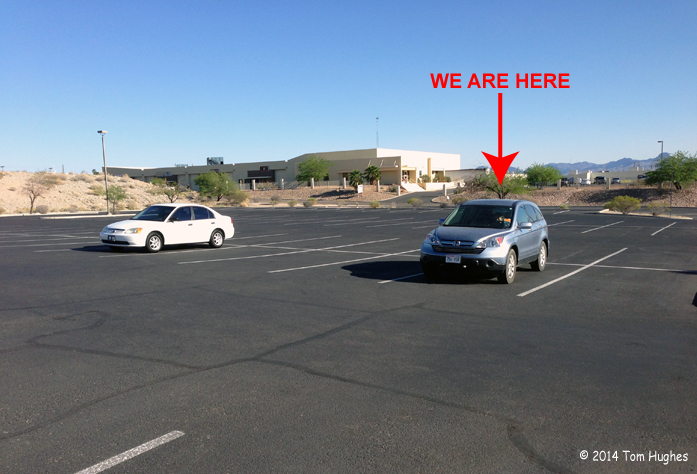 The AZ DMV Parking Lot was Full When We Arrived