We Bought Another Jeep

We’ve owned several manual transmission vehicles, but it’s been a while. We’re adjusting “pretty good”, but I still find myself coasting to a stop at a traffic light with the Jeep in gear.

Essentially we traded a trouble-free Honda for a problematic Jeep . . . but the Jeep is much much more fun and we can go off road again. Yahoo!

First impressions: the 2008 Rubicon is so much better than our old 1993 Jeep. To freeway drive the 1993 long distances, you really needed headphones. The road noise was horrible and the leaf spring suspension was a back killer. The 2008’s suspension is stiff and reminds me of our old 1997 Toyota LandCruiser, firm but pleasant to drive. Also, road noise on the 2008 is minimal. Driving from Phoenix to Lake Havasu City was essentially like riding in our CRV.

Traveling off road has been one of the biggest allures of our full-time RV travels so far, especially in the Southwest’s desert country. Both Jan and I are still surprised that we love the desert. Not something we expected at all from folks raised in the green lushness of the Midwest. On the other hand, we even liked the frozen tundra a Green Bay, so maybe it’s just the fact that we’re still Southwest newcomers. 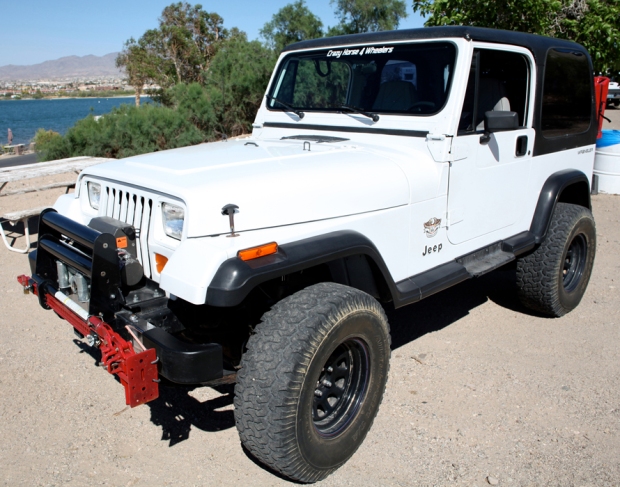 We’re planning to attend at least one of the Jeep Jamborees in our travels this year. The Mole Lake Jamboree near Crandon, WI looks promising. Each Jeep Jamboree is given a Trail Rating as to its difficulty. I thought we could do “6-7” rated trails until I saw some trail pictures. I’m throttling that back to a “3-5” rating now.

Following in a long line of Jeep owners, we’ll be adding stuff to our new-to-us Jeep.

First, of course, is buying a Hi-Lift Jack for off-roading and then finding a place to attach it. I’m going to try to the “bull bar” on the front bumper. I’ve seen these jacks attached to Jeep bumpers, and I found that not to be a good idea after damaging our previous Hi-Lift after running our 1993 Jeep into a large rock.

Second is finding a way to tow our 2008 Jeep behind our RV. I’ll have to replace those two, huge front bumper tow hooks with a 1-inch D-ring mounts so that I can connect our existing BlueOx tow bar. The D-ring mounts attach directly to the Jeep’s rathe formidable frame. BTW, it’s great owning a vehicle with an actual frame again. It’s like driving in a block of iron. Very self assuring.

Finally, I’d love to add a few inches of lift and add bigger tires, but that’s down the road for now. BTW, our current tires are BF Goodrich All Terrain T/A KO2 LT265/70R17. (The “KO2” stands for 2nd generation on/off road tire.) So far I LOVE THESE TIRES! Road noise is minimal at speed. However, we haven’t driven off-road yet, so it remains to be seen how these tires will work in gravel, mud, sand, rocks, etc. etc. Nevertheless, I’d read some good reviews on the KO2 tires: African Bush Review