Between working on the RV last Spring, Summer, and Fall, and my day job, I’ve been remiss in my daily (or even monthly) blogging.

Anyway, the latest “project” is figuring out  what sort of Internet connection we’ll need on the road when we start full timing. Having a reliable Internet connection will be critical as we’ll not only need it for email and keeping in touch but also for paying bills and managing our money.

I’ve relied on a number of RV forums, especially www.rvnetwork.com (the Escapees RV Club), for help as there are a number of full timers on these sites who have been on the road for several years and know the ropes.

For the past couple of years I’ve used a USB 3G modem (U760) from Millenicom, a company who “resells” data services from Verizon and Sprint. We paid $60 a month for 20GB of data through Verizon. In 2013 terms — that’s a good deal.

However, I felt the need for speed, so a week ago we traded in our two, 5-year-old 3G AT&T iPhone 3s for two, new Verizon 4G LTE iPhone 5s . . . ZOW! Though the new iPhones are definitely cool, the increased data speed of a 4G LTE connection is a thing to behold. I did a couple of www.testmy.net speed tests and I’m averaging about 10 Mbps — compared to 1.0 Mbps using 3G.

The “gotcha” is that we’re talking more $$$. We’re using Verizon’s Share Everything data plan in which the more data you want, the more you’ll pay. At the moment we’ve signed up for 12GB per month for $110, and this doesn’t include the “fees” for our two iPhones and our new 4G LTE Pantech UML290 USB modem. 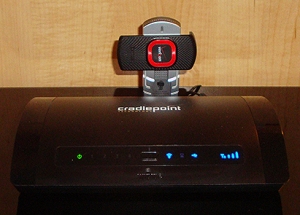 The UML290 USB modem is used with a CradlePoint MBR95 3G/4G wireless router. This router creates our own WiFi hotspot which allows us to connect Jan’s iPad and our other computers to the Internet via WiFi. Very slick.

However, this setup allows us to scream through a whole bunch of data very fast.

I hoped that 12GB would be more than enough until I looked up how much data we were using on our Time Warner wired connection.

It’s pretty clear we’re in for a Scarsdale data diet as we’ve been averaging about 50GB per month on Time Warner.